This is our daughter's 18th birthday, and coincidentally, my brother's birthday. They were born 40 years apart--you do the math.

My third pregnancy was a surprise. I don't usually tell people since I don't think it's fair to my daughter to advertise that. I'm sure none of you will break it to her, though. Because I was an "older" mother--all of 38--I had some genetic testing done early in the pregnancy. The alpha fetal protein test, the one that checks for neural tube deficits like spina bifida, came back positive twice and I ended up having to have amniocentesis. We chose not to find out the baby's gender.

My daughter was due on December 12 and early in December, my doctor was telling me that it would be any day. On the 12th I had definite signs that labor should begin soon, but nothing happened. On the 17th, I went to the hospital to be induced. On the way, my husband and I speculated about what the baby would look like. We already had a boy with blonde hair and brown eyes and one with dark brown hair and dark brown eyes. We thought the baby would have dark hair and blue eyes. After four hours of being induced, nothing happened and we went home from the hospital without a baby. I went about my business making cookies, going to my son's kindergarten holiday party, going shopping and welcoming my parents who came to help us out. I was royally tired of strangers and store clerks stopping to stare at me and asking whether I should be out walking around. (Do you think anybody asked that of those prairie women who dropped their babies in the field and went back to work?)

Finally, on the first day of winter, I went into labor and we headed to the hospital through some snow flurries. I looked at the clock as we went into the elevator and saw that we arrived at exactly 9:00. Once we got to the labor room, I asked for drugs, but was told it was too late (to this day, I think they lied). My husband's coaching consisted of looking at the fetal monitor and announcing to me that I had just had a big contraction. I guess he figured that since this was the third time, I had the whole childbirth business down and didn't need much help. At 10:26, the baby arrived and was screaming so loudly I had to ask the staff to repeat whether it was a boy or a girl.

She may have been a "surprise", but what a gift she's been. She's bright and articulate and has a quirky sense of humor. She's also a good friend and has a compassionate heart. (And she has blonde hair and brown eyes.) Here's to a happy birthday, and the start of another great year!
birthday

Popular posts from this blog 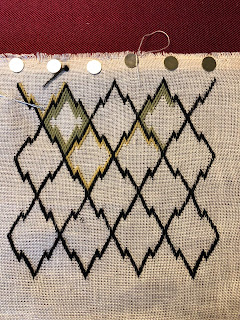 We are not so patiently waiting for spring to arrive in southeastern Pennsylvania.  Four nor'easters in March is just cruel and I've had enough of this cold weather.  The upside is that it makes it easy to stay inside and stitch.  I'm making progress on a few things, but for reasons not clear to me, I've had a hard time settling down with one project.
I had the pleasure of taking two classes with Catherine Theron at the end of March.  You can see the projects she taught on the Salty Yarns website by clicking on the Events tab.  When I got home I was inspire to find the piece from the first class I took from Catherine at the Delaware Valley Historic Sampler Guild many (maybe 10??) years ago.  This will become a Quaker sewing case.


During class, I struggled putting in the black for the Florentine pattern which is why I put it away all these years.  After looking at it closely, I found and corrected several mistakes.  I filled in several of the diamonds while watching Vi…
Read more 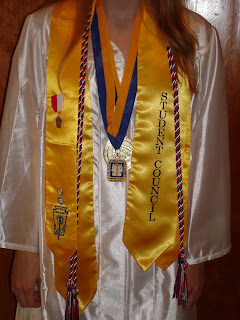 It used to be that the tears would start rolling whenever I heard "Pomp and Circumstance." Until my kids paired these lyrics with the tune:
My reindeer flies sideways;
Your reindeer flies upside down.
My reindeer flies sideways;
Your reindeer is dead.
Which is why I was dry-eyed at my daughter's high school graduation last night. (OK, so I did choke up when she sang in the choir and I realized we were probably watching her perform for the last time.) All in all, it was a very happy time and both my sons were also in attendance (one came in from LA and I retrieved the other one from his job as a camp counselor.) My daughter spent four years collecting "graduation bling" as she and her friends referred to it and you can see that she amassed quite a bit of it from honor societies, band, drama and student council. We were all so proud of her and can't wait to see what the next four years will bring.
Read more 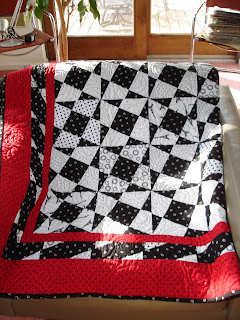 Here's one of the quilts I took to the long-armer last summer.  As yet, it has no name.  This quilt was one of the projects from my monthly "scrap club" and I did indeed use some of the black and white prints in my stash.  The block is made with an X-block ruler.  In the case of this pattern, I made a nine patch and then placed the ruler so that the outside patches would be cut at an angle.  Those pieces were used in the border.  The whole time I was making the blocks, I thought about how to put a little color in the quilt.  My choices were running to lime green or yellow as I don't tend to like the red/black/white quilts I've seen.  Then I spotted this perfect red and black print and it all came together.  Good thing, as I wasn't loving this quilt in its pre-border stage.  Now it's a family favorite.  It resides on the back of our couch and each of the kids tried to make off with it when they were home for Thanksgiving.  And don't you think the long…
Read more

Susan
I'm a wife and a mother of three adult children. I retired from a job in education in June, 2013. Stitching has been my passion for over 30 years, and I have the works in progress (WIPs) to show for it. I began quilting in 2007 and now have even more WIPs.